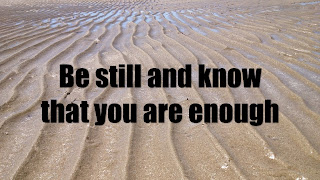 This thing enough-ness is a scourge on our society.  I don't know a woman who doesn't battle it at some point or another.  I'm no exception, and it's something I actively work on.  The feeling that we're not enough may be around our spouses, our jobs, our kids.  It also comes at us almost 24/7 from the media.  It's no wonder we make ourselves nutty about it.

Magazines covers stare at us from the checkout at the Grocery.  The same magazine cover may preach both self acceptance and the latest diet.  We go online at the end of the day to decompress. We sign on to Pinterest or Facebook and browse through hundreds of pins and updates.  We're inundated with thinspiration posts to 'help us stay motivated' but instead they likely eat away at our self esteem.  There are 100's of recipe's with beautiful images of food or craft projects we'll never get to that would make Martha Stewart feel intimidated.  At work, we don't want to call in sick even though we are because we're afraid of what others will think.

The thing I'm realizing about enough-ness is that enough-ness is entirely about the person on the other side of that judgement.  Whoever created the standard or is doing the measuring, is the one holding the enough-ness.  If I'm not enough for someone, it's really all about them and their expectations and not at all about me.

Where it really gets tricky is when we buy into it.  And again and again, we do.  We take it in, we take it on and it affects us to the core of our being.  The damage comes when we adopt it as a belief and begin to behave as though it's true... as though we are not enough.    It's difficult and time consuming to undo when you eventually get around to realizing and internalize that it's a big lie.  When we process it through with a therapist instead of our BFF, it can be expensive too.  Just saying.

I know someone whose business card reads 'What you think of me is none of my business'.  I love that.  It's so true.  It's also hard to remember.   What helps you to remember that you ARE enough?


Posted by Live Beautiful You at 7:33 PM

Email ThisBlogThis!Share to TwitterShare to FacebookShare to Pinterest
Labels: enough, enoughness, inadequate, self acceptance, self love